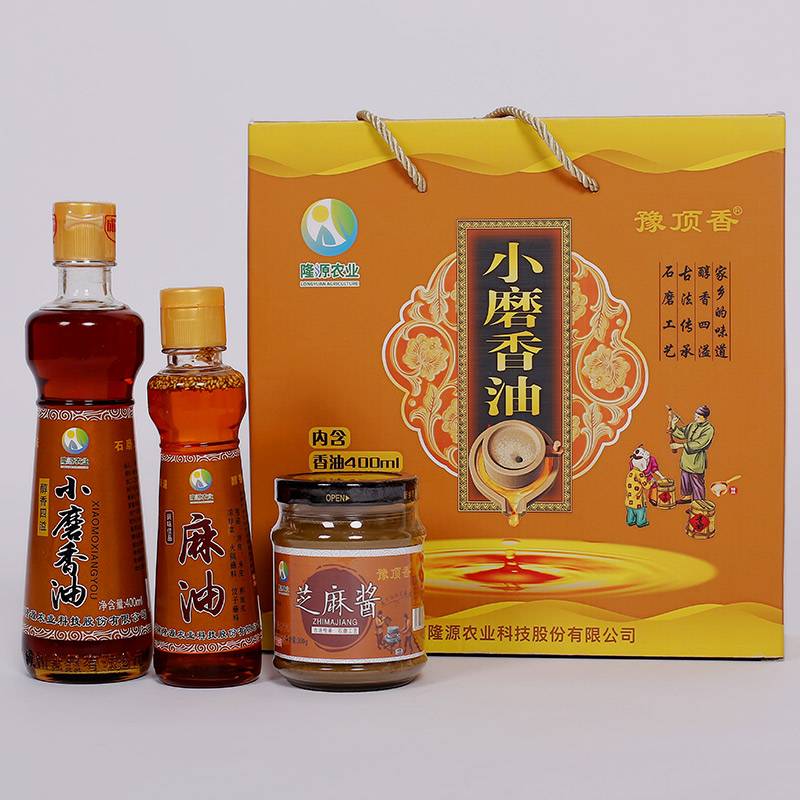 Sesame oil, also known as sesame oil and sesame oil, is a traditional Chinese seasoning vegetable oil. It is a fat extracted from sesame seeds and has a strong aroma of fried sesame seeds. The flavor of sesame oil is pure and resistant to aftertaste. It is an essential seasoning in daily life. Whether it’s cold dishes, hot dishes or soups, it’s a fine touch

According to the usage, North China and Northeast hot pot sesame sauce is a common one, so it is also called North sauce. The raw materials of sesame sauce are refined white sesame seeds. Fine workmanship, golden color, smooth taste and mellow taste.

Hanyuan pepper has a long history and was listed as a tribute in the Tang Dynasty, hence the name “Gong Jiao”. The authentic Hanyuan pepper is named Qingxi pepper because of its red color, large grains and heavy oil, rich aroma, mellow and refreshing.

The sesame oil has a strong aroma, which can promote appetite and help digestion. It is rich in unsaturated fatty acids such as linoleic acid, oleic acid, and linolenic acid, which are easily decomposed, absorbed and utilized by the human body to promote the metabolism of cholesterol and help eliminate deposits on the arterial walls and prevent cardiovascular diseases. Has a certain effect.

Sesamin, which contains only 0.5% of the sesame oil, has excellent antioxidant properties, can protect the liver and heart, and delay aging. At the same time, sesamin also has a good anti-cancer function. The sesame oil is also rich in vitamin E, which has the function of promoting cell division and delaying aging. The sesame oil also has the effects of moisturizing the intestines and laxative, moisturizing the throat and throat.

For patients with habitual constipation, drink a mouthful of sesame oil on an empty stomach in the morning and evening, which can moisturize the bowel and relax the bowels. People with smoking habits and alcohol addiction often drink some sesame oil, which has a certain effect on reducing the poison of tobacco and alcohol. When cooking, the oil temperature should not be too high to avoid the loss of nutrients.

1. Tahini is rich in protein, fat and a variety of vitamins and minerals, and has high nutritional value;

2. Sesame paste contains a lot of calcium, and regular consumption is good for the development of bones and teeth;

3. The iron content of sesame sauce is several times higher than that of pork liver and egg yolk. Regular consumption not only has a positive effect on adjusting partial eclipse and anorexia, but also corrects and prevents iron deficiency anemia;

4. Tahini is rich in lecithin, which can prevent the hair from turning white or falling off prematurely;

5. Sesame paste is also one of the dipping ingredients in shabu-shabu hot pot. A good sesame paste can improve the flavor. This is the benefit of hot pot sesame sauce.

Note: Due to the high calorie and fat content of sesame paste, it is not advisable to eat about 10 grams a day.

Shopping tips: Avoid choosing tahini with too much oil in the bottle, because less oil means fresher.

As we all know, sesame is an oil crop with a very high fat content, which can reach 58.9%, of which 42.4% is oleic acid, 39.7% is linoleic acid, 9.8% is palmitic acid, and 6.4% is stearic acid. Both oleic acid and linoleic acid are unsaturated fatty acids, which have the functions of regulating cholesterol, reducing thrombosis and platelet coagulation, preventing arteriosclerosis, anti-aging, preventing disease and cancer.

Sesame is not only high in oil, but its protein content should not be underestimated. According to scientific analysis by nutritionists, every 100g of sesame contains 21.9g of protein. Sesame protein is a complete protein, which is easily absorbed by the human body. The content of essential amino acids accounts for 30% of the total amino acid content. Except for the slightly lower content of lysine and isoleucine, other amino acids can meet the needs of the human body.

Vitamin E is a natural antioxidant that can enhance the body’s immunity and resist harmful substances from harming human tissue cells. Vitamin E also has anti-aging and longevity effects, can promote the absorption and utilization of vitamin A by the human body, and cooperate with vitamin C to reduce skin infections, moisturize the collagen fibers and elastic fibers in the skin, and make the skin elastic.

Sesame is rich in iron. The iron content in every 100g of sesame is as high as 50mg, which is 3 times more iron than the same amount of spinach. In the treatment of iron deficiency anemia, sesame is incomparable to other foods. Sesame is also a selenium-rich food. Eating more selenium-rich sesame can reduce the incidence of prostate by 63%. In addition, sesame seeds are also rich in calcium, but calcium is mainly found in sesame skins, and its calcium content is second only to shrimp skins.

Lignans are a kind of biological regulators contained in plants and are the main active substances in sesame. Sesamin and sesalin are the main lignans in sesame, and their mass fractions are 0.2%~0.5% and 0.1%~0.3% respectively. Sesame lignans not only have strong in vitro elimination of free radicals or low-density lipoprotein (LDL) peroxidation activity, but also strong in vivo antioxidant activity, inhibit prostaglandin production, lower cholesterol, and prevent breast cancer.

Write your message here and send it to us